What ever would the holidays be without pictures to remember all of the good times, and sometimes the nightmares that go with them. Oh sure, you can look back and laugh at them now, but for a while you know they invaded your dreams, and threatened to eat you. Just take a look the these below. Who knows, maybe you are in one of them... Follow dddavids's board Creepy Easter Bunny Photos on Pinterest.
Ahhhhh, nothing like a little walk, or run, down memory lane to get you into that Holiday spirit, huh? That, of course, is not the best part. No, not at all. The best part is now that you are all grown up (assuming that you are), it is now your turn to come up with those "special" holiday memories for those unfortunate people near you. I believe they call it "The Circle of Life" :) 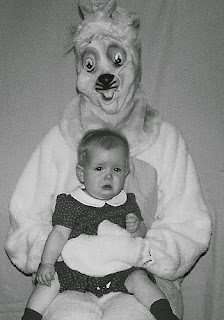 Have yourself a seriously Happy Easter, and may you find yourself surrounded by Marshmallow Peeps, and Chocolate Bunnies!
Posted by davids ghost at 11:00 AM No comments:

Losing Weight Before Easter. Can it be done?!?

I'm sure that I am not the only person on Earth that has this problem. During the summer I am in fairly decent shape (weight wise), but come the fall, with all of the exciting and tasty Halloween candies, followed by Christmases, and Easter's sweet offerings, I am having a little trouble fitting in to my clothes. 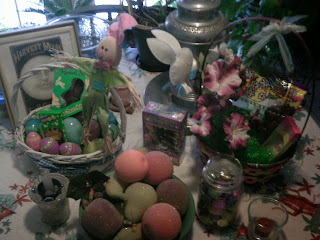 I also don't know if it works this way for everyone else, but to get off the sugary holiday treats I also have to wait for that moment if true inspiration. That moment that I know that it will truly work, and that I would most probably stick to it (see what I did there)... Well, for me, that moment came this morning. I woke up and thought "I have exactly 13 days until Easter!!! I know that because I conveniently have a Count Down To Easter Page, and it told me today that I have 13 days before I am going to be at a large gathering of people, and that became my inspiration, my true inspiration, that I knew I could stick to. I don't want to show up looking a "little pudgy". That means that realistically I could loose 13 pounds by that day just by cutting out the sweets that I consume in a day, because I really don't eat that much otherwise. So therefore, I think it might be doable. Yeah! 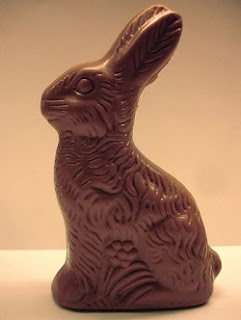 I am sure that there are people who think...just go out and exercise, but that has never been my way. I don't mind taking the dog for walks, and doctors would say that walks were good, but as far as actually doing real exercise... Eeeeek! I might start running if someone were behind me with a knife, but we would probably have to agree to stop, and rest every block. I am pretty sure of that. In a horror movie I would most assuredly be that one who starts to run, but falls down, and stays there, but on to that more positive thought...losing maybe 13 pounds. I think I can do it! Any of you are welcome, of course, to join me if you like. Today I weigh 146 pounds, and though I stand 5'11 1/4", all of that extra weight currently sits in my midsection, and does not look good at all. So it is today I begin, with Easter candy currently in the house, mind you, but I woke up with that "true inspirational moment", and I will get to that Easter Celebration a little skinner, I know it. I will leave my progress in the comments section below, and maybe some of you will join me in this endeavor of "Skinner By Easter"! It can be done.

My best guess would be that few people know that March 20th has the designation of being the International Day of Happiness. To be celebrated world wide! It, however, should be more than a brief posting on social media. It should be a day to look in the mirror, and view your true self, and how you conduct your daily life. 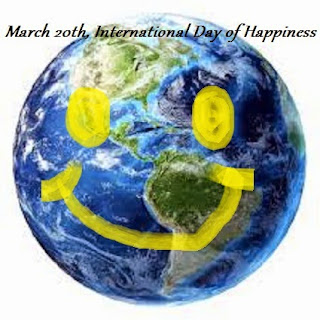 A day to hold yourself up for all to see, and examine what comes back as a work in progress, and determine how you are progressing. Spreading a little joy cost us very little, and yet, how many of us take the time to do that every day. Many of us who complain have no good reason for doing so. Some of us are the very creator of our own situations in which we complain, and yet we wallow there. Why, when there is so much to be happy for, and so much to enjoy. Let those of us, who can, vow to make March 20th a day to put on our big pants, open our doors, go out into that great big world, and spread a little joy, and happiness. Then wake up the next day and do it all over again. You may be surprised how truly happy that makes you.
Posted by davids ghost at 9:24 AM No comments:

True UVA Justice...wait for it. 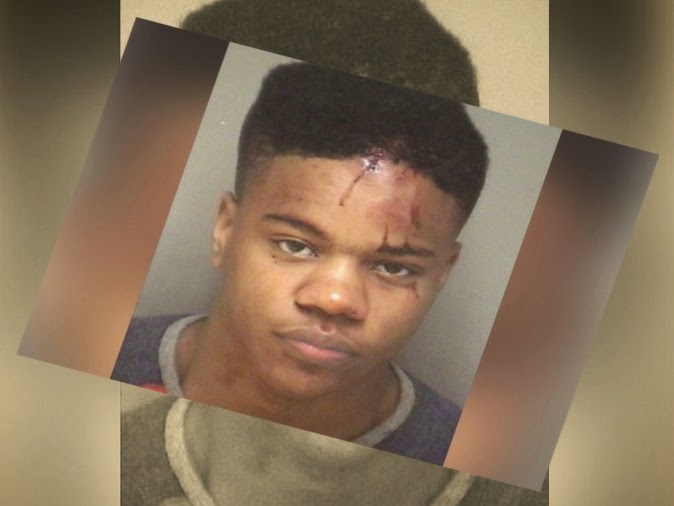 Did you ever think that you saw something, then changed your mind, or dismissed it for no other reason than you didn't want to think about it. I don't do that. I like to find out things as they happen, or when I hear about them. I like to get to the truth of the matter, and figure out "why". It makes me a happier person if I can find out the reasons for the occurrences of things, because if you understand them, you may change your reaction to them. Personally I think more people should be like this. They should take time to step out of their body, and independently examine events. I think it would make this world a much more hospitable, and fun place, but sometimes people are just bent on drama, or making time for their 15 minutes... By the end of the day, ask yourself:
* "Did I take personal responsibility for my actions, and their outcome?"
* "Did I make the world a better place?"
* "Will I be a better person in the morning?"
Sometimes we get the answer that we were expecting, and sometimes not, but shouldn't it always be the truth that we are looking for? #JusticeforMarteseJohnson or just plain #Justice
I think it is important to remember that each happening in life is always different, and so is each individual.

How do I think some of these cases should have turned out???
It is, of course, strictly from a bystander perspective of being on the outside looking in, but I will put forth my humble opinion.
1: Trayvon Martin,
On the night of February 26, 2012, in Sanford, Florida, United States, 28 year old George Zimmerman fatally shot Trayvon Martin, a 17-year-old high school student.
I would have brought fourth some type of charge(s).
2: Michael Brown,
The  shooting of Michael Brown occurred on August 9, 2014, in Ferguson, Missouri, a suburb of St. Louis. Brown, an 18-year-old, was fatally shot by Darren Wilson, 28, Ferguson police officer.
I would have found the officer not guilty.
3: Eric Garner,
On July 17, 2014, Eric Garner died in Staten Island, New York City, after a police officer put him in a chokehold for 15 seconds.
I would have brought fourth some type of charge(s).
4: Tamir Rice,
The shooting of Tamir Rice, a 12-year-old boy, occurred on November 22, 2014, in Cleveland, Ohio. Two police officers, 26-year-old Timothy Loehmann and 46-year-old Frank Garmback, responded after receiving a police dispatch call "of a male sitting on a swing and pointing a gun at people" in a city park. A caller reported that a male, was pointing "a pistol" at random people in the Cudell Recreation Center. The caller stated twice that the gun was "probably fake".
I would have brought fourth some type of charge(s).
There you have it. I welcome your comments as well.

Posted by davids ghost at 11:02 AM No comments: